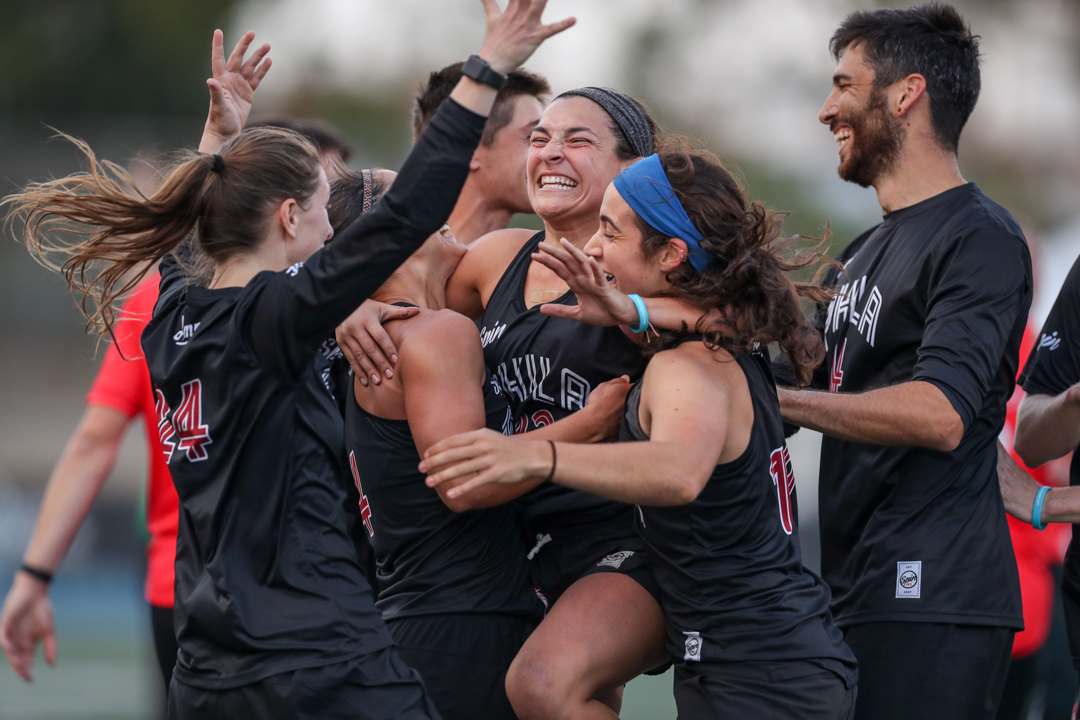 San Diego, Calif. (Oct. 27, 2019) – It can’t be understated how truly unpredictable the mixed division turned out to be this year. At every turn, a new victor arose, trumping our assumptions and making us think twice about who we would see match up in the championship final. So come Sunday afternoon, when AMP (3) and Mischief (6) took the field, it was truly anyone’s game.

Mischief received the pull, starting on offense downwind. AMP forced a turn with shut-down person defense, but after Mischief got it back, Matthew Crawford was able to get a big outside-in flick to Cody Kirkland to score in the end zone. AMP quickly returned the score with a huck downwind, a strategy both teams relied on heavily, for better or worse, throughout the first half. The two were on serve until AMP pulled away with three back-to-back scores to make it a 4-2 game. Crawford stopped Mischief’s slide with a D in the end zone that halted AMP’s upwind scoring attempt, which would have been another break, followed by another assist to Kirkland to make it a one-point differential again at 4-3. However, AMP was able to pull away, after a few close calls, and break for half thanks to Paul Owen’s impressive D and ensuing huck to Sean Mott in the opposite end zone. AMP entered the break up 8-6 on Mischief.

After halftime, AMP received the pull going downwind and made quick work of a huck from Bobby Roos to Sean Mott to score. AMP, taking Mischief off guard out of halftime, went on a four-point run, making the score 12-6. The energy on the sidelines and in the stands did not match the scoreboard for Mischief, as the players from San Francisco engaged the audience to try and pump up their teammates. The game seemed all but over at 14-7, but Mischief decided they wouldn’t go down without a fight. Facing AMP’s zone, Mischief’s throwaway just outside their end zone seemed ripe to end the game, until Crawford got another D in the end zone and repeated his “D and huck to score” combination from early in the game – this time to Lexi Zalk to make it 14-8.

Even with an incredible layout from Natalie Bova, AMP’s huck attempt couldn’t connect, and Mischief followed up the miss with an upwind break, finding Zalk in the end zone yet again. 14-9.

Though the crowd seemed ready to follow Mischief on a six-point run, AMP was able to close the game with solid handler play, with Michael Panna, Anna Thompson and Natalie Bova working the disc up the field and Bova toeing the line on a throw up-line from Thompson to secure the win. AMP claimed the National Championships title for the second year in a row.

Philadelphia AMP Wins Their First Title at the 2018 National Championships